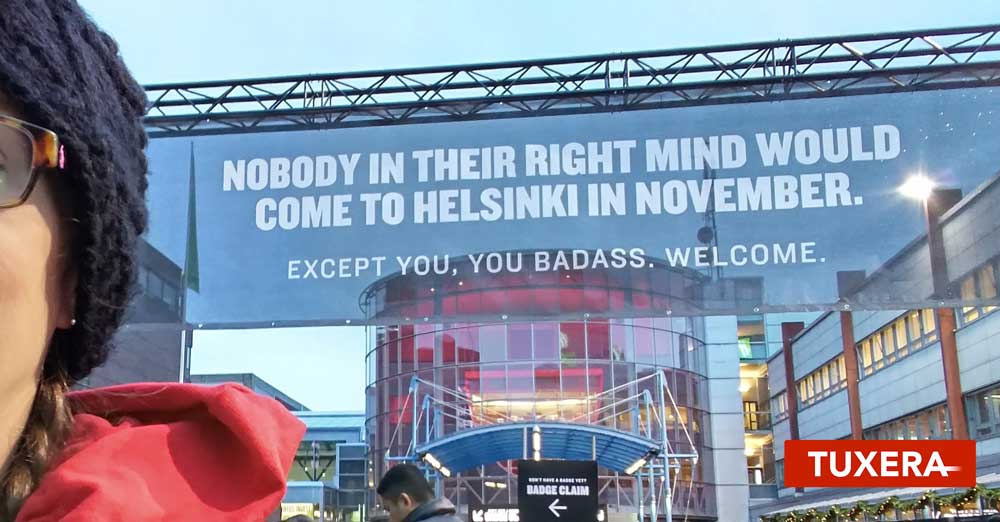 What we learned at Slush 2016 – a recap from 6 perspectives

Slush had a record-breaking year. And we’re not talking the icy slop found on the streets of Helsinki from November until April. We mean the annual two-day international startup and investor event. A record 17,500 guests made it to the conference this year, including 2,336 startups, 1,146 investors, 610 journalists, and 12 Tuxerians in red hoodies.

Tuxera is no longer a startup, but tech and innovation are always central to Slush, which is why we showed up in such force. From what we saw, the trending topics in the European startup scene are: artificial intelligence (AI), virtual and augmented reality (VR/AR), data mining and analysis, mobility (including self-driving cars), and space technology. There was something for everyone there, and each of us went in with a different mission. Read on for more of what we learned at Slush 2016.

A lot going on with AI, AR, and VR

“It was really interesting to see all kinds of artificial intelligence applications popping up. Maybe now all the gargantuan amounts of data gathered will actually be used for something big! Also, be on the lookout. Virtual and augmented reality will approach their hype cycle peaks in early 2017, which means we’ll start to see where these technologies will actually fly and where they will not.”

Concern for our environment, our jobs, and people

“Many of the talks and startups that caught my attention were focused on sustainable technology, space tech, and using data to change the way we live and move around. The community is clearly concerned about the impact technology has on our environment, our jobs, and people in general. Several discussions at Slush also touched on political, philosophical, and socioeconomic topics related to technology. People in this sphere have a unique vantage point on how rapidly technology is advancing. Slush showed us that the tech community should play an active role in creating forward-thinking legislation, economic solutions, and education initiatives to keep pace with that progress.”

Slush 2016 was true to its startup roots

“I was happy to see Slush has come back to its roots and give the spotlight to startups again. Big organizations like Google, Microsoft, and Samsung had smaller spaces than in past years, with exception of Nokia, which was showcasing their innovation projects.

Hot topics on the event floor were AI, VR, and autonomous driving. Data mining and analysis was pretty dominant too – for example, a lot of startups had developed dashboards or analytics platforms to crunch all types of data.

I didn’t see a lot in terms of hardware this year, however. One hardware company that attracted attention was Eve Tech. They were the startup behind Eve V, a crowdfunded PC that raised $1 million in just four days.”

“I agree with Eva. I’ve been to Slush now four times and I’m happy to see the focus return to startups. They were physically located in the center of the venue. I think that’s meaningful in the broader context of what Slush is about – that startups are central to innovation.

This year many startups had enterprise software solutions, primarily for analyzing data and metrics. There were also a lot of interesting uses for VR, especially in travel and gaming. This year, I saw a lot less internet of things (IoT) technology than I would have expected given all the hype. In that sphere, retail and indoor navigation solutions were heavily represented. There was also a lot less shareconomy solutions than in previous years – meaning less “the Uber of X-industry” startups.

Need an investor? Find the perfect match at Slush

“Slush’s online Matchmaking tool is a great way for startups to find and book meetings with investors, companies, and the media. I’ve been to many startup events around the world, and there’s nothing like this anywhere. My advice for startups: start booking your meetings early on. The time slots fill up fast.”

All brands big and small should keep it real

There were also a few sessions on design and brand building for startups, which our graphic designer, Jukka Malkamäki attended. “A common theme in these talks was authenticity. A brand needs to feel real to its audience. Andrew Stalbow, co-founder of Seriously presented this case most convincingly. He cited research on how young people feel YouTubers are bigger stars than Hollywood actors. These video bloggers share a lot about their lives and actively engage with their audiences – they act authentically. This is a stark contrast to the glamor of Hollywood, which seems distant and fake. Andrew also had some good advice for all brands big and small about keeping it real: Go beyond performance marketing. Don’t forget creativity – and don’t take yourself too seriously.”

There’s lots of innovation waiting to be found at tech events all over the world. This year we also went to IFA, the largest consumer electronics fair in Europe. See what we learned there in our IFA16 wrap-up.