The accessibility of sensors and camera modules is making the car industry increasingly data-driven. When combined with state-of-the-art software and advanced computing, data transforms into decisions inside autonomous cars. As autonomous vehicle technologies continue to evolve, the data generated inside cars only continues to grow exponentially. But how much data does a connected car actually generate?

To answer this question, it’s important to understand that not all autonomous vehicles have the same level of automation requirements. SAE International, a US-based association that develops standards for automobiles, created a 6-tier system defining the various levels of car automation: 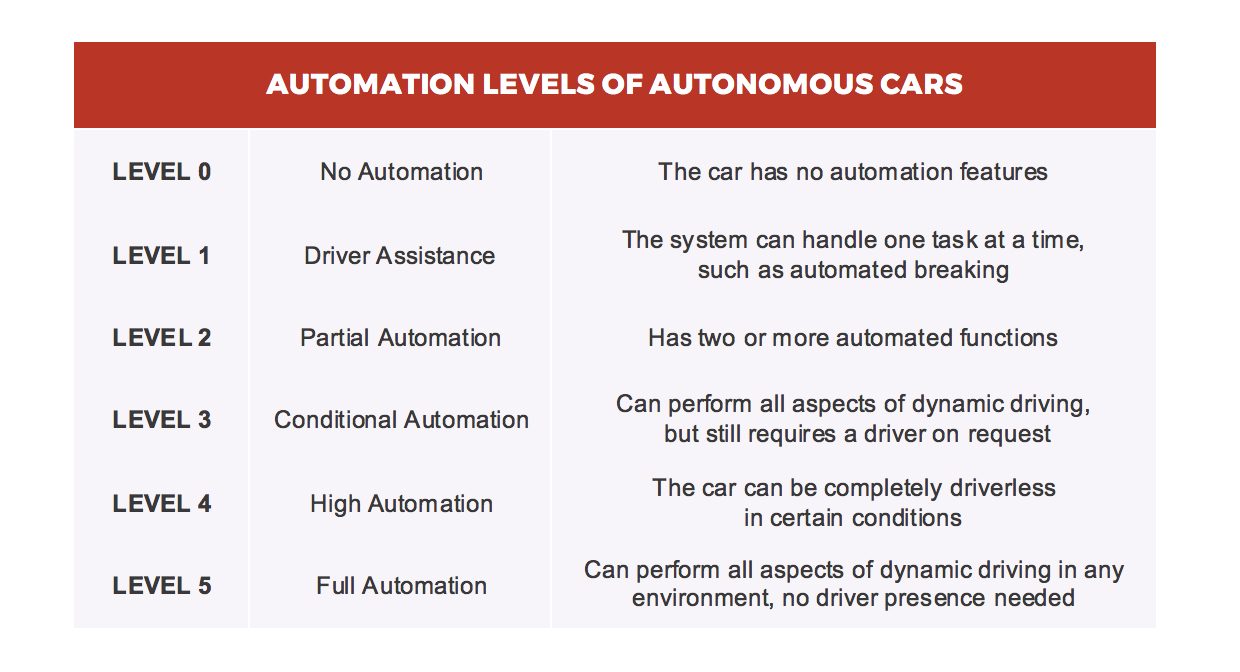 At present, the most advanced cars on the market are only at Level-2 autonomy. Some car makers are already announcing their first production-ready Level-3 autonomous vehicles for 2018, and plan to develop Level-4 autonomous cars by 2020.

Today, even at lower levels of autonomy, connected cars generate around 25 Gigabytes of data per hour. And as more self-driving features appear inside connected cars, the architecture required to make it all possible will become increasingly complex. This directly correlates to the number of sensors needed for an autonomous system to operate.

It’s important to point out that not all sensors are the same. A broad spectrum of various sensors exists, each having a special purpose and quantity in a car. Depending on the sensor setup, the total amount of data generated can vary substantially. As presented by Stephan Heinrich from Lucid Motors, here are some estimates on sensor-generated data:

Combined, the total bandwidth can reach up to 40 GBit/s (~19 TB/h). Even the lowest possible figure of 3GBit/s (~1.4TB/h) is a very substantial amount of data to maintain.

To give you an example of how much data that actually is, a basic laptop with 240 GB of storage on board could hold around 30 DVD movies. But the laptop would run out of storage capacity in less than a minute in this environment. A phone with 32 GB of storage would be full in under 7 seconds, assuming the flash storage would even be able to store data at the required speed.

On a yearly estimate, the amount of data is even more staggering. According to AAA, an average American spends 17,600 minutes driving annually. When combined with the amount of sensor data estimated above, one car could produce between 380 TB to 5 100 TB of data in just one year.

As cars with higher autonomy levels are released to the market, cars need to handle substantially bigger amounts of data than ever before. Processing that data in a fast and seamless way is now and will continue to be one of the main challenges for car makers into the future. To tackle these requirements, car makers are exploring both hardware- and software-based data storage solutions that can handle this data stream in the most efficient package possible. Achieving this will be an important milestone in the development of production-ready fully autonomous vehicles.

Car makers and Tier-1 suppliers – see how we can make data handling and storage faster, more secure, and more reliable.

Russian-Latvian, Stan has lived all over Europe and enjoys making complex things sound simple. Before he joined Tuxera, Stan was running his own start-up and working closely with Amazon Alexa. He likes talking about design, growth hacking, technology, e-sports and chess.

Embedded World 2020: Whitepapers from our experts

Are you formatting your SD memory cards optimally?