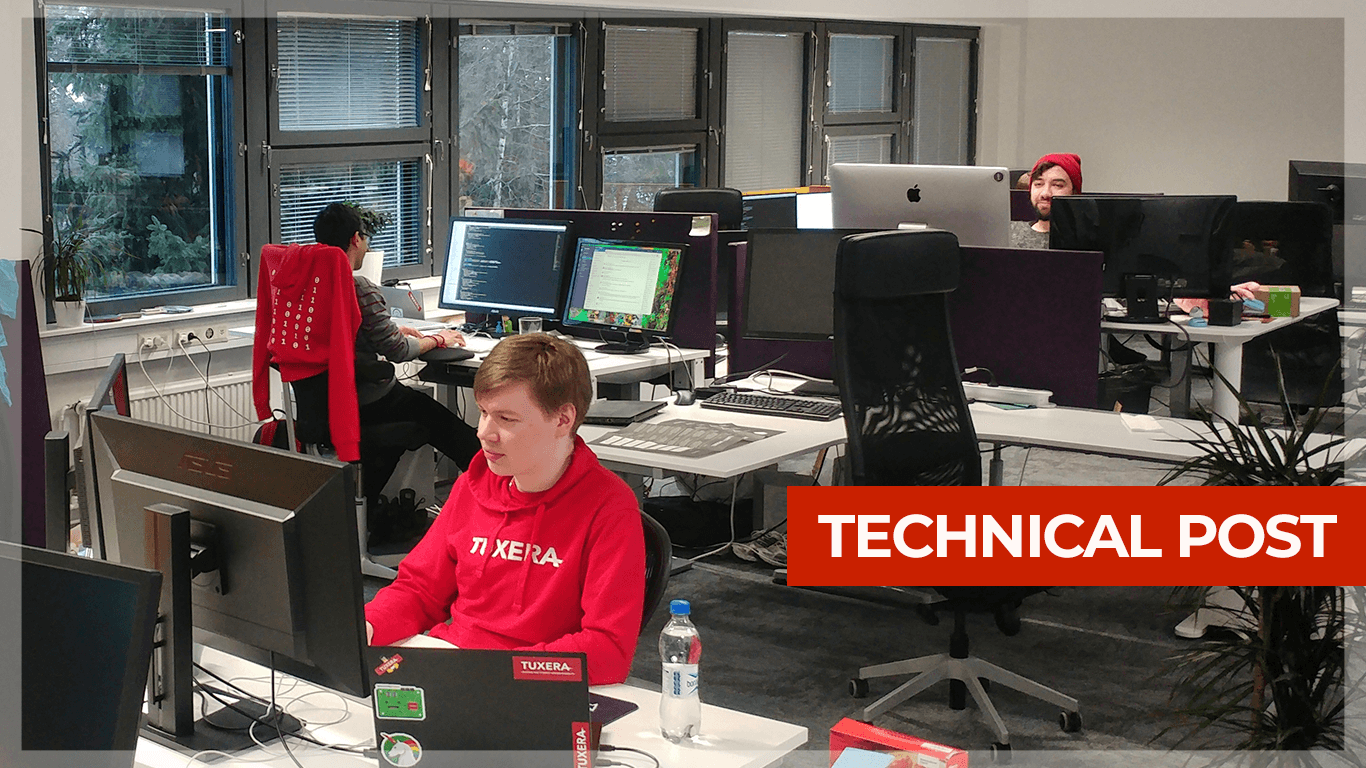 Continuous Integration1 (CI) has become a very popular addition to software development cycles. With this process, companies are reaping great-quality software development. Typically, continuous integration comprises of building (compilation and packaging), followed by smoke testing. In some cases, this system is extended to continuously deliver software products to production systems—an approach called Continuous Delivery2 (CD). Monitoring performance is a key aim, but it usually comes at a later stage, in the CD pipeline. However, here I describe the benefits of executing the performance benchmarking earlier in the smoke testing phase using Elastic Stack3.

What is Continuous Integration?

From Wikipedia, Continuous Integration (CI) is the practice of merging all developer working copies to a shared mainline several times a day. This is the first step in most DevOps practices and primarily aims to solve integration problems. Usually the software is checked out from the version control system, compiled, and packaged. This is called the build phase. In normal cases, there are builds for every change to the software repository. There is also the smoke testing4 phase, which comes immediately after a successful build phase. If both phases are successful, the committer or developer manages to successfully push the changes to the system. Then, the system gets ready to receive the next change.

A CI system is meaningless if any of these phases takes hours to finish. The biggest challenge with this approach is to have a faster build phase, because smoke testing is typically a very minimal set of tests to verify the software.

After establishing a reliably working CI pipeline, and if there is need to have a faster release process, then the Continuous Deployment or Delivery (CD) pipeline should be implemented. In most systems, CD implementation comes following CI. Also, CD is far more difficult to achieve due to the duration and bureaucracies around it, as it involves multiple phases of testing: integration testing, system testing, end-to-end testing, performance testing, and acceptance testing, to name a few. A software being tested does not have to undergo all these testing phases, but at least some are based on the product or customer needs.  Put simply, the CI’s scope is until “deploy to QA” (see figure below) whereas CD’s scope extends until it is deployed to production. 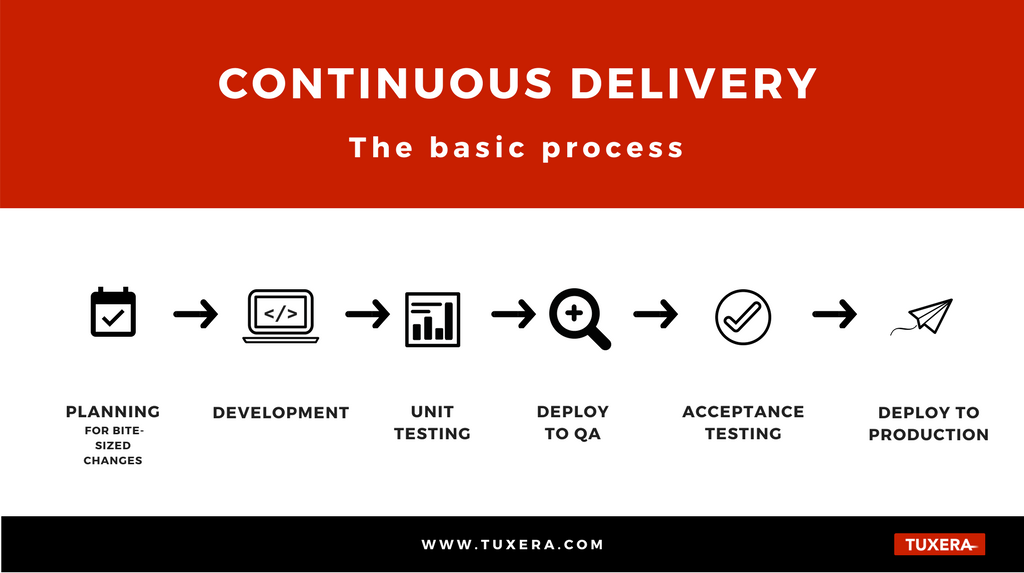 It is apparent that faster performance testing is important to achieve faster CD, which is challenging. This is due to factors such as performance testing duration, requirement of real hardware devices, a huge variety of kernel-architecture-file system combinations, amongst others. Taking only the duration factor for slow CD, there are many options which are becoming industry standards. Some advocate that a software can be slightly tested and delivered to a customer in a Canary release6 approach so that it is easier and faster to rollback. There are also approaches which perform regression release testing after the software is in production. This method will always roll-in with fixes and never rollback to previous versions.

How Tuxera does it

This solution is based on an early testing approach, facilitated by shifting the phases which usually exist after CI, but before CD. Earlier testing gives us insight into driver performance already at the smoke testing phase.

Performance tests usually produce a lot of results, especially due to the fact that they are run on a per-commit basis. We use Elastic Stack, which indexes and graphs the performance test result of every commit. Elastic Stack consists of components: Elasticsearch, Logstash and Kibana—which store, process and index, and visualize logs, respectively. 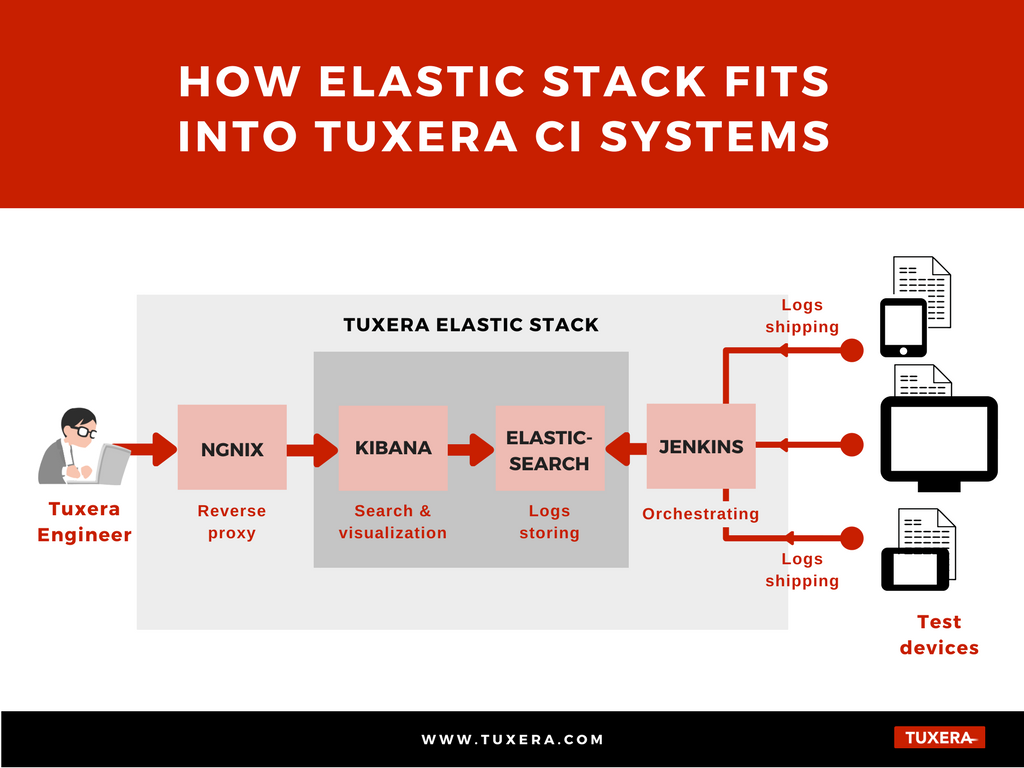 From the figure above, Jenkins8 acts as an orchestrator executing tests on devices, fetching and shipping the logs to the Elastic Stack server. For simplicity, the logs are converted to json format so they can be fed straight to Elasticsearch, where they are seen from Kibana instantly. An Nginx reverse proxy acts as a frontend serving the user interface.

The graph on the following page shows the behavior of our unpack, browse, read, write, and rsync tests over Git commits tags on full performance tests. The y-axis indicates the delay in milliseconds for an operation. The x-axis indicates Git commit tags. As one can see, there has been a clear improvement of 75% on rsync speeds as per the 27 July commit.

This is just a sample example. The overall picture of critical performance tests looks like this:

*Please get in touch with us (info@tuxera.com) if you would like to know more specific details about our tests.

The CI approach, which is a byproduct of agile practices, defines integration of software components well ahead of the development cycle in comparison with the older waterfall model. However, not many advancements have been made concerning the practices over the years. Our approach, which takes the performance benchmarking phase one step ahead into CI to find problems well in advance, is clearly an improvement for us. It is also evident that huge log processing tools like Elastic Stack have helped us easily store, process, and plot large amounts of logs for our purposes.

Currently, we are analyzing the graphs manually, which on rare instances can be laborious and slow before the committer is notified. It is also possible to define alerts in Elastic Stack. This means that the committer can be notified whenever the performance drops below a certain range. This is a work in progress.

It is always better to verify software products well ahead in the pipeline to ensure a very low cycle time. To make the CD faster, it is also a good practice to push some phases in CD ahead into CI if that is feasible. Apparently, all that counts is to reduce the cycle time for a faster product release to production, which this approach tries to solve.

Anoop is a DevOps lead at Tuxera. He has over 15 years experience in implementing CI/CD systems and test automation. Currently, his focus has been expanding Kubernetes on distributed on-premise servers. In the past, Anoop has implemented tools for downtime free releases and building CI/CD tools. Anoop holds a Master’s in Mobile Technology from University of Jyväskylä.

The Embedded Online Conference – ongoing tech seminars a click away

Help! Why are my embedded devices failing?